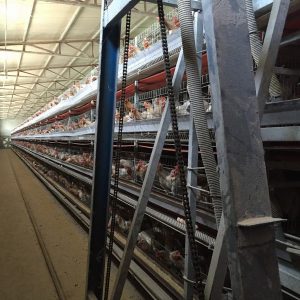 There are many reasons for egg damage in daily feeding management. As far as the production site is concerned, there are mainly the following main factors:

First, the egg’s own factors, the breed and quality of the chicken. The strength of the eggshell is affected by heredity, and there will be some differences between the variety and quality. Generally, brown shell eggs have a lower breakage rate than white shell eggs, and chickens with more eggs have higher breakage rates than less production.

weeks old. After the start of production, the surface area of ​​the egg will increase with the increase of the age of the week, and the strength of the egg shell will decrease. Therefore, the older the age of the laying hen, the higher the damage rate.

State of health. Various diseases have an impact on the quality of the eggshell. For example, infectious bronchitis can make the structure of the egg abnormal, irregular in shape, and increase the breakage rate of the egg.

Secondly, calcium, phosphorus and vitamin D have the greatest influence on eggshell quality in nutrition. In general, the amount of calcium required in the diet of laying hens should be 2.7-3.75%, which is 3-4 times greater than the 0.9% calcium requirement of non-laying hens. The phosphorus content should be 0.5%. Vitamin D has the effect of promoting the absorption of calcium and phosphorus. For example, in the absence of vitamin D, even if the laying hens are rich in calcium and phosphorus, they will produce soft shell eggs.

3. Environmental changes The temperature of the chicken house has a greater impact on the eggshell. The higher the house temperature, the more the eggs are damaged. Egg shells produced by chickens in summer are usually about 5% thinner than eggs in other seasons. This is mainly because high temperatures will reduce the chicken’s feed intake and the calcium intake accordingly. In addition, in a high-temperature environment, if the relative humidity is high, the heat dissipation of the chicken is unfavorable, and the egg will be damaged even more.

Fourth, the sense of responsibility of the management staff. This is a major factor. Whether picking eggs, putting eggs, moving egg boxes and weighing, etc., whether it is handled lightly or not, has a great influence on the breakage rate of eggs.

Improper vaccination. Such as vaccination during the laying period, due to immune response, within a few days after vaccination. In addition to the decrease in egg production, the breakage rate of eggs will also increase.

Fifth, the equipment that is likely to cause egg damage mainly includes chicken cages and egg containers.

The type of chicken coop. Due to the different arrangement of cages and the situation of eggs passing through the egg trough, the damage rate will also be different. Generally, the damage rate of single-layer cages is higher than that of multi-layer cages, because the two rows of cages share an egg trough and egg trough. Located under the trough, it is not easy to find and repair in time if a fault occurs.

The wire of the bottom net of the cage is too thick, the elasticity is poor, the inclination is not enough, or the egg trough of the lower chicken cage is often subjected to collision deformation, bending, pressure welding, broken head, and the egg collection belt is skewed. There is no egg protection under the net in front of the cage Plates, or eggs in the upper cages, are eaten by the chickens in the lower cages, especially the stepped ones, which often increases the breakage rate of the eggs.

Egg container. Use an iron bucket, wire basket or wooden box with rough inner walls or even exposed nails to fill the eggs, or the eggs are overfilled and placed on top of each other. The egg tray is too large or too small, which is the cause of broken eggs: In addition, in the field Uneven roads, carts or driving too fast can increase egg damage.

Brian Fairchild, a poultry extension scientist at the University of Georgia, discussed temperature and chick…