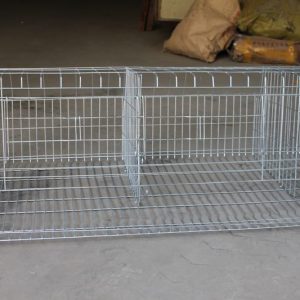 1. The setting of the cage

If the golden pheasant is cultivated on a large scale, the double-row cage is the most suitable. Generally, the length of the cage is four to five times the width, which can provide sufficient space for the golden pheasant. The cage also needs to set up two places, a lounge and an activity room. The lounge shelters the golden pheasant from the wind and rain, and the activity room provides them with places to eat, drink and move. The cages must be set up in a relatively dry environment and have sufficient water sources, so as to provide them with a high-quality growth environment as much as possible.

Generally, from May to June each year is the breeding season of golden pheasant. If you choose a rooster about two years old and a hen about one year old, a single rooster can be paired with three hens. When the hens produce 6-8 eggs, they will start to incubate autonomously. You can also use electrical appliances to incubate. After one week of incubation, you should take photos of the eggs to see if there are any fertilized eggs. come out. Remember to control the temperature at around 38 degrees and keep the humidity at around 68% when incubating electrical appliances.

In two months later, the color of the golden pheasant will gradually be similar to that of the adult golden pheasant, but the size is not yet so large. Adaptation to weather changes and disease resistance will be significantly improved, this time should be placed in a cage for rearing. The feeding density of golden pheasant should not be too dense. Each cage should not exceed 3. Prepare feeding equipment in the cage to ensure that each golden pheasant can eat and drink normally. The chicken feed on the market can be used as the feed, and the concentrate should be appropriately reduced. After about a year, the male and female should be separated, because this time they already have the ability to reproduce.