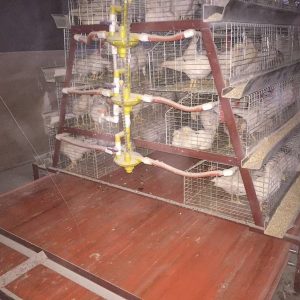 What is eliminated chicken?

Laying hen farmers raise young hens into laying hens. The laying period of hens is limited, and it is impossible to lay them all the time. When the hen does not lay eggs or the egg production drops to uneconomical value, or during the breeding process, for various reasons, the consumption of the hen to the chicken farmer is less than the value of the egg production it can contribute This hen needs to be eliminated to eliminate the chicken.

When is the most appropriate time to eliminate chickens?

If chickens with disease or poor health are found in the process of raising chickens, they should be eliminated in time. The price of the elimination is cheaper. When is the best time to eliminate the laying hens?

Laying hens are generally eliminated at about 500 days of age, thinking that after 500 days of age the egg production rate will decrease significantly and the quality of the eggs will deteriorate. Farmers can choose to eliminate chicken when the price is higher. Generally, the price for eliminating chicken during the festive period is slightly higher, so it is also a good choice to choose to eliminate before the festival.

When the farmed laying hens are phased out has a lot to do with the cost of laying hens, such as egg price and feed. If the egg price is higher, it can be eliminated later. If the egg price is going to rise in the future, the elimination price will also rise, because many farmers are not willing to eliminate it during this period, and selling eggs is more profitable than selling eliminated chickens. The number of laying hens eliminated a large number of years ago, and few reports of the winter epidemic situation, so it will not affect the consumption of live chickens and frozen chickens.

According to the characteristics of chickens, low-layer laying hens have three characteristics. They are small and light-weight, and the abdomen of low-production laying hens lacks elasticity. The cloaca can accommodate 1 to 1.5 fingers, and they are tight and dry. eliminated. Chickens with yolk peritonitis should also be eliminated, because the yolk coagulation in the abdominal cavity causes the abdomen to lose its elasticity, often lying on the ground, this type of chicken should be eliminated in time.

If you can’t judge by the above methods, you can keep them in isolation. In the morning, check the birth pass for eggs to be laid. After 3 consecutive days, no eggs can be eliminated. Eliminating chickens sometimes lays eggs in the egg box, but does not lay eggs. Such chickens should also be eliminated in time. At this time, there will be unshaped foreign bodies in the abdominal cavity of the chicken.

Eliminate chickens should be eliminated late or early

In China, the market value of eliminated chickens is still quite large, so choosing a suitable price to sell chickens, the income is also relatively rich, which is of great significance for raising the income and profit of chicken farmers. At present, the core factor for deciding the price of phasing out chickens is supply and demand. For example, due to the impact of the avian flu epidemic at the end of the previous year, there is little demand for phasing out chickens, and the prices are very low. Therefore, hens are seldom eliminated, resulting in excessive egg supply. The price is extremely low.

However, the main income of laying hens is eggs, so it is often not too late to be early to eliminate hens, because many chicken farmers when laying out hens, the laying performance of these hens is still good. In this way, there will be a contradiction. If the price of chicken elimination is relatively high for a while, do you choose to eliminate egg hens earlier to earn money for chicken elimination, or continue to raise money for egg production? This is a very complicated matter. Son, it’s not easy to answer.

However, the current common problem in layer farming is the premature elimination. For some breeders who have good breeding levels and have some experience in raising chickens, the laying period of laying hens is longer and the egg production time is longer, usually reaching more than 70 weeks of performance. However, many chicken farmers have eliminated the laying hens for a much shorter period of time, and some have been eliminated even under 60 weeks of age. This is actually a big waste of egg production performance, and it is not cost-effective.

Some chicken farmers may say that the hens in the late egg laying period will have poorer egg quality and lower egg production efficiency. This problem does exist objectively, but these can be overcome through chicken farming experience and breeding management techniques. This is why, the longer the chicken farmers, the later the hens are eliminated. As for those friends who are worried about not phasing out now, and the price of phasing out chickens may fall next, I just want to advise you: since raising hens, I want to make money from eggs. Although the benefits of phasing out chickens are good, I still have to comply Originally, because you are a layer farmer.

The second is to eliminate chickens with beautiful appearance. Chickens with yellow feet and yellow beaks and bright appearance are eliminated within 250 days. In the same flock, the individual’s production performance is different. When the production lasts for a period of time, this difference is more obvious. At about 250 days of age, the feathers are complete, shiny, and the activities are extremely flexible and fast. , Chickens with beautiful appearance are often low-yielding chickens, even do not lay eggs, and empty consumption should be eliminated;

The third is to eliminate chickens according to manure, and go to the chicken house to observe the manure at night or in the morning. Be eliminated in a hard state;

The fourth is to eliminate chickens that have been discontinued. Chickens after 280 days of age have been laying eggs for more than 5 months. Most of the chickens that have been discontinued appear pale and thin. Such chickens must be eliminated. Due to long-term continuous egg production, the pigment has degenerated, and the yellow pigment in various parts (especially the legs and beak) gradually disappears and becomes white. The more eggs are laid, the more severe the discoloration. At this time, if some chicken legs and beak color change from white to yellow, it also means that the chickens are discontinued and should be eliminated;

The fifth is to eliminate big-bellied chickens. Flocks after 280 days of age often appear to walk like penguins. When touched, they can feel big abdomen hard (yolk peritonitis) or soft abdomen like water (fallopian tube cyst). Should be eliminated;

The sixth is to eliminate the early moulting chickens. Laying hens usually complete moulting from September to October every year after completing a laying period. Low-yield chickens begin to moult in August, and have a long duration and long production suspension time, so they are eliminated;

The ninth is to eliminate ovarian inflammation chickens. From the appearance, those laying hens who did not lay eggs because of ovarian inflammation had no symptoms within the first few months. 250 days after the peak of egg production, no eggs were picked , Observe the egg production after 4 pm, mark the number of eggs of 4 chickens with 3 or less, or 3 chickens with less than 2 eggs, and then, for 5 consecutive days, get up at about 5 am The chickens touched one by one for eggs, and marked the ones without. After 5 days, for the full panning of more than 3 marks (so that the chicken egg production rate does not exceed 60% and has no breeding value), then it will be carried out every other month.

Factors that increase the consumption of chicken during the laying period