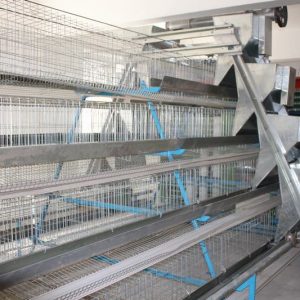 Cage layer fatigue is also called sudden layer death syndrome and young hen disease. It is a disease that has occurred in caged layer hens in recent years, and it mostly appears in the hot summer.

Causes Calcium deficiency and poor physical development of chickens are the direct causes of the disease. Because most of the calcium is absorbed in the duodenum within 30 minutes after feeding, and the eggshell is formed at night 10-12 hours after ovulation, the disease usually occurs at night.

Disease characteristics High-laying hens are onset from the initial stage to the peak laying period. Chickens with a rapid increase in laying rate occur frequently, and generally no longer appear after the laying peak. At the time of the disease, the chickens had no obvious abnormal changes in eating, drinking, egg production, and mentality. There were no diseased chickens when the lights were turned off at night, and dead or sick chickens were found when feeding in the morning. It is mostly acute in summer, and chronic in other seasons, which is characterized by brittle bones and decreased egg production rate.

Sick chicken lying prone, having loose stools, high body temperature, and acute death after a sudden strange cry. The dead chicken is in good physical condition and has a convex cloaca. Sick chickens that die slower have their tails trembling, and sometimes their legs are stretched back, their necks, wings, and legs are weak and weak. They are at the mercy of others. Put a diseased chicken of this degree on the ground and wait for it to lay an egg, or a human After work-assisted delivery, he will soon recover.

Dead chickens have no obvious pathological changes. The follicles are normal, the fallopian tube mucosa is dry, and there is a hard-shelled egg in the uterus. The contents of the intestine are pale yellow and thinner, the intestinal mucosa is largely shedding, and the intestinal wall is soft.

Prevention and Control Measures 1. The stocking density of chickens should not be too high, and the brooding and rearing period should be divided into groups in time, and the basketing should not be too early. Generally, it is better to basket the chickens around 100 days of age. 2. Keep physical maturity and sexual maturity consistent. 3. Change the feed in time according to the age of the chicken. Generally, use the pre-production feed 2 weeks before the start of production. When the egg production rate is 5%~10%, it is replaced with the peak egg production. Fourth, the content of calcium in the feed for high-yielding layers should not be less than 3.5%, the ratio of calcium and phosphorus should be appropriate, and vitamin D3,200 or more IU per kilogram of feed should be added. 5. Get up early and observe the chickens every day, so that the sick chickens can be found in time and artificial births can be performed in time. When sick chickens are found, they must be picked out from the cage as soon as possible and kept on the ground alone, and they must drink and eat normally. Generally, they can heal themselves within 1 week. For chickens in the same group with low blood calcium levels, add 2% to 3% coarse-grained calcium carbonate to their feed, and 2000 international units of vitamin D3 per kilogram of feed. After 2 to 3 weeks, the blood calcium of the chickens It can rise to a normal level, and the incidence rate is significantly reduced. The supplementation of coarse-grained calcium carbonate and vitamin D3 takes about 1 month.

Essentials of rural free-range chicken technology, you must master

Raising chickens in woodland gives many people confidence and worry. Confidence lies in that people…

How to improve the egg production rate of chickens in summer?

In summer, the weather is hot and the temperature of the chicken house is high.…