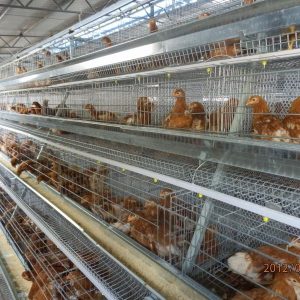 Technical service personnel and marketing personnel in production are often helpless because farmers complain about high feed intake. In fact, the feed intake of laying hens is affected by many factors, which are now explained as follows:

Our most common varieties such as Hyacinth Brown, Hyacinth Gray, and Hyacinth White (W-36) have very different feed intakes between these different layers, for example, the theoretical feed intake of Hailan Brown Shell in spring and autumn is 110-115 grams, and Highland White is 100 grams. The same is for brown-shell laying hens, and the intakes of Hailan brown, Issa brown (lower feed intake), Roman brown, and Jinghong 1 also differ. Due to the irresponsibility of individual parent breeder farms and the difficulty of distinguishing breeds, it often happens that Jinghong No. 1 with a low feed intake was purchased, but because the high feed intake of Romain Brown was actually raised. Understand, even complain to the feed mill. Everyone must feed their layer hens according to the nutritional requirements and feed intake of different breeds, and they must not deliberately limit feeds because of the precautions of feed intake, thereby affecting the performance of the egg production performance of the breed.

Laying hens in the appropriate ambient temperature, the energy needs can be estimated according to this formula: calories/day. only = W(140-2T)+2E+5△W. Where W is the weight of the layer hen at the time, in kilograms; T is the average ambient temperature in degrees Celsius; E is the average daily egg production of a single chicken (grams), which is the egg production rate% × average egg weight (grams); △W is the average weight gain (especially for chickens before 35 weeks, which consume more energy due to rapid weight gain). Feed intake of layer hens at this time (g) = actual energy required per day (calories/day. only) × 1000 ÷ metabolic energy of feed (calories/kg).

3. Factors such as own weight and production performance affect feed intake:

Fourth, due to brooding, different breeding periods, different management levels, and different nutritional levels, the feed intake of the flocks is very different.

2. The nutrition and management of brooding and rearing affect the feed intake of laying hens: the nutrient level of feed in brooding and rearing is high (the proportion of bran added is low, and fat is added), and the use of high nutrient brooding feed takes longer. Feeding time is short, so the overall feed intake of such chickens will not be high. Especially in the flocks that are in the high temperature in summer after brooding, rearing or starting production in summer, once the amount of bran added is too low or no bran is added, the feed intake of such flocks will be very low to meet the nutrition after laying eggs Bring difficulties. Of course, for flocks with short brooding time (take 0-6 weeks brooding mode) and long brooding time, due to the low nutrient broiler feed used for a longer time (more than 8 weeks), plus more than 14% bran added during brooding The use of low-energy concentrates and full-price feeds during the above or growing period will cause the chickens to consume a high amount of feed after the start of production, and cause serious waste of feed. Especially if such chickens catch up with the autumn and winter seasons, the feed intake will be unusually high.

3. The water consumption of laying hens has a great influence on the feed intake: in spring and autumn, the water consumption of laying hens is generally 1.8-2 times of the feed intake. Laying hens with sufficient water intake have high feed intake and good egg production performance. In practice, the number of nipple drinkers in the farmer, the level of the water pressure of the pressure reducing valve, and the drinking mode (nipple drinking or sink drinking) are different, which have a great impact on the drinking volume of laying hens. For those with insufficient drinking water due to low drinking water pressure and insufficient nipple quantity, their feed intake will inevitably be low, and the egg production performance of such chickens will not be very good.

1. For chickens with low feed metabolic energy, the feed intake will be high: under the premise of suitable temperature and feed nutrition balance (the protein-energy ratio of different seasons and different stages and the nutritional energy ratio of basic acids and vitamins are relatively fixed ), laying hens are “energy-based”, under the same conditions, the daily intake of high-energy balanced diets of the same chicken will be lower than that of low-energy diets. Let’s compare the above with 95% egg production and an average egg weight of 66 grams. Under the above conditions (weight 2 kg, temperature 18°C), when the feed metabolic energy is 2650 kcal/kg, it will theoretically eat The amount is 125.8 g/day. Only (see “three” calculation above). If the metabolic energy of the feed is 2500 kcal/kg, then its theoretical feed intake is: 333.4 kcal×1000÷2500=133.4 g/day. Only. Compared to 125.8 g/day. The feed intake of each chicken is 7.6 g per chicken per day. This is the core of using low-energy and low-cost feeds to make money with low energy and low prices (increasing feed intake). In production, due to the low utilization rate of feed digestion with low metabolic energy, the losses caused to farmers are far from increasing the amount of feed intake.

2. The nutritional balance of the feed affects the amount of feed intake: We talk about the “energy feeding” of laying hens, which refers to the balanced nutritional diet under suitable temperature conditions. When the temperature is too high, too low, or the nutrition is not balanced, the lever adjustment function of the chicken can break. For example, when the levels of crude protein, lysine, and methionine are low, the chicken will break the limit of higher metabolic energy of the formula and meet the needs of the lowest amino acids through higher intake. This is why when we use so-called “high energy and low protein” with high energy, low crude protein, low amino acids, and low vitamins, to break the energy ratio formula (the feed with 5% 20% soybean meal is the most prominent), even in the formula When the metabolic energy is high, the reason for the high feed intake of laying hens is still high. This will cause the chickens to consume excessively high energy in order to consume the lowest crude protein, amino acids and other nutritional requirements, resulting in excess energy. This not only results in poor production performance caused by insufficient nutrient intake of layer hens, but it is also prone to relatively high energy intake, and metabolic diseases such as fatty liver appear, increasing the death rate of farmers. Of course, under high-energy and low-nutrition levels, the regulation effect of chickens is limited. For example, when the lysine level is too low, the chicken feed intake will be greatly reduced and “to show resistance”!

Sixth, different regions have a great influence on the feed intake of laying hens: my country has a vast territory, different natural conditions, and different raw material quality and addition ratios, resulting in great differences in feed intake of the same breed of hens raised at the same time. This is not only the impact of the annual average temperature, day-night temperature difference, light time, geographical features and monsoon, but also the differences brought about by the breeding habits, management level and nutrition level, which is a comprehensive result. For example, my country’s northeastern and southern provinces; coastal areas and inland areas; Yunnan, Shandong, Hebei and other hens have very different feed intakes.

How to divide male and female pheasant seedlings in one month?

Main points of management of four-year ventilation in chicken coop

Whether raising chickens in captivity or stocking, there must be a coop for the chickens…