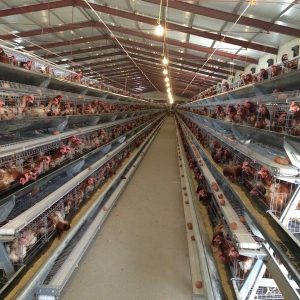 What are the methods for artificial moulting of layers? Artificial forced moulting is mainly caused by changing the drinking water, feed, and light conditions, so that the chicken is suddenly in a harsh living environment, causing stress and causing moulting. The most common is the manual forced moulting of the hunger method.

The benefits of manual moulting?

Laying hens, under natural conditions, moult and lay off after about 1 year of laying. The natural moulting period of about 4 months has a long rest period, which not only requires a lot of feeding costs, but also the chickens are not very moulted, the egg production rate is low, and the quality of the eggshell is also inconsistent. The economic benefits of the chicken industry. Artificial forced moulting has the advantages of short moulting period, prolonging the production and utilization of chickens, neat egg production after moulting, increased egg weight, improved egg quality, and reduced broken egg rate.

What are the methods of forced moulting of layers?

First, the pharmaceutical method Add zinc oxide or zinc sulfate to the feed, so that the amount of zinc is 2% to 2.5% of the feed. The chickens were fed freely for 7 consecutive days. On the 8th day, they started to feed the normal laying hens. On the 10th day, they were all stopped. After 3 weeks, they started to lay eggs again.

Second, the hunger method is the traditional forced moulting method. The feeding time should be about 30% of the weight of the chicken. Generally, after 9 to 13 days, the light is shortened to 2 hours in the first 2 weeks, only for drinking water, and then increased by 1 hour every day for chickens to eat and drink. Until 14 hours of light. The protein in the diet is 16% and calcium 1.1%. After the egg production starts to pick up, increase the calcium to 3.6%. Hens stop production within 6-8 days. Feathering begins on the 10th day, with 15 to 20 days having the most feathering, and 35 to 45 days to end the moulting process. 30 to 35 days to resume egg production 65 to 70 days to achieve more than 50% egg production rate, 80 to 85 days to enter the peak egg production.

Empty the feed in the trough, and stop feeding for 7-10 days (the specific stopping time can be adjusted according to the health status of the flock, the mortality rate of the chickens, and the change in body weight. The mortality rate should not exceed 3%.). Laying hens will still lay eggs during the feed suspension period. In order to maintain the quality of the eggshells, they can be fed with shells. During fasting, they can be added by 20g per chicken. Stop water for 2 days and drink freely.

21 days before the forced moulting, light control was performed, and the light was suddenly reduced to 8 hours. After feeding was resumed, the light was gradually increased for 1-2 hours per week until the daily light reached 15-16 hours.

3. After the end of the feeding, each chicken is fed with an average of 18% crude protein egg-feeding diet of 18g on the first day, and then increases by 18g every day until it increases to free feeding.

1. The choice of flock: the implementation of forced moult should be the flock with the highest egg production rate in the first year.

3. Moulting season and time: we must take into account economic factors, flock conditions and climatic conditions. Forced moulting in hot and cold seasons will affect the moulting effect. Generally, forced moulting is performed when chickens begin to moult naturally in autumn, and the effect is best.

4. The length of hunger time: generally 9 to 13 days, depending on the season and the fatness and mortality of the chicken. In the season of gas temperature, when the fatness of chickens with good fatness or low body weight is low, the hunger period can be prolonged, otherwise, the hunger period should be shortened. If the time is too short, the goal of moulting and stopping production will not be achieved. If the time is too long, the mortality rate will increase, and the damage to the chicken body will also be large. The general mortality rate is controlled at about 3%.

5. Illumination: When the artificial forced moult is implemented, the illumination should be reduced at the same time.

6. Feeding management during the moulting period: At the beginning of the forced moulting period, chickens will not stop production immediately, often with soft or broken eggs, shell powder should be added to the trough, 2 kg per 100 chickens; flat-bred chickens Hunger should prevent pecking bedding, sand, feathers, etc .; there must be enough feeding noodles to ensure that all chickens can eat feed at the same time.

pigeon cage for sale,Young chickens are hens that are about to mature and are the…